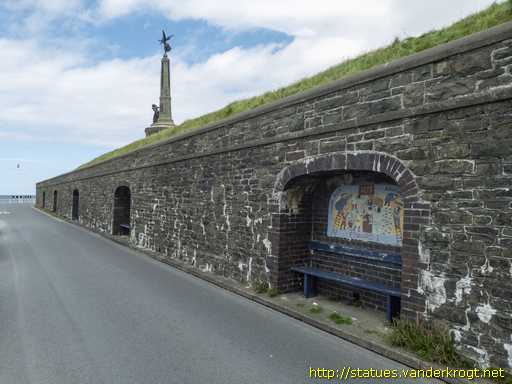 Series of nine mosiacs in arches in the castle wal below the Aberystwyth Borough War Memorial. The mosaics illustrate nine aspects of the castle history.

This exhibition is the culmination of two years work by a large number of local groups to make a series of mosaics highlighting aspects of the history of Aberystwyth Castle. The project was lead by Pod Clare and designed and coordinated by Stuart Evans. The mosaics may now be seen on the wall surrounding Castle Point from the Promenade. …

A project devised and implemented by Ceredigion Museum has won two major awards for the outstanding way it informs and involves the public. Stuart Evans, from Ceredigion Museum and Pod Clare, Community Artist who worked with nine local community groups to design and make decorative panels for the promenade at Aberystwyth were thrilled to be recognised in this way for the work which took two years to complete.

Item Code: gbwa090; Photograph: 27 July 2012
Of each statue we made photos from various angles and also detail photos of the various texts.
If you want to use photos, please contact us via the contact form (in Dutch, English or German).
© Website and photos: René & Peter van der Krogt