Terracotta statue of Queen Victoria with four lying lions. The statue was funded by George Sanger (1825-1911), a Newbury born circus owner, and designed by Arthur E. Pearce. It was unveiled on 24 July 1903 in the Market Place.

The Reading Mercury of 27 June 1903 described the memorial:


The work was admirably executed by Messrs. Doulton and Co., of the Royal Doulton Potteries, Lambeth. In accordance with Mr. Sanger'a instructions, the design of the Memorial has been kept as simple as possible, so that the chief interest might be concentrated the crowning figure of the late Queen. This figure is about eight feet high (including the plinth over which the robes are draped). In the front panel of the upper pedestal, facing Cheap-street, appears the inscription: "To the great and good Queen Victoria, 1819 -1901." The lower part of the Memorial is in the form of a cross, measuring 22 feet each way. On each the pedestals, forming the arms of the cross, is a recumbent lion. In the front recess abends a female figure typifying "Fame." Grasping a wreath of laurel in the uplifted right hand, the figure is represented gazing uop towards the Queen. In panels occupying the side recesses are modelled the Newbury borough arms, and an inscription follows: "This Memorial was Presented to his Native Town of Newbury by George Sanger, 1902."
The total height of the Memorial is 28 feet. The material used is terra cotta of a dark buff tint. The design was made Mr. Arthur E. Pearce, and the statues and lions were modelled by Mr. John Broad, both of the Royal Doulton Potteries at Lambeth. The date records the actual gift by Mr. Sanger, the completion of the work having, to some extent, been delayed by the production of figure of "Fame", whioh was a happy afterthought of the donor.

In 1933 the monument was dismantled and stored in the gardens of Greenham House. In 1966 it was relocated to the presewnt position, without the lower pedestal and the statue of Fame and with only two lions. Since June 2002 all four lions are next to the statue. 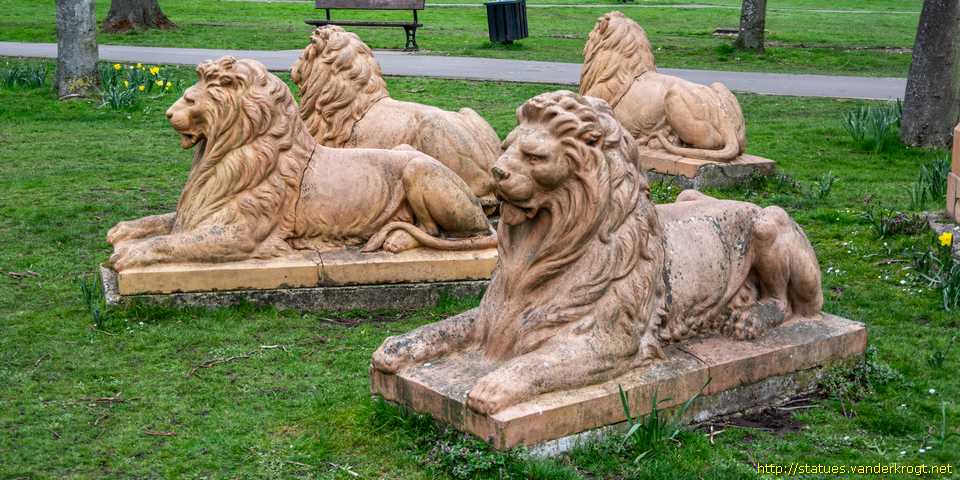 Item Code: gbse202; Photograph: 20 March 2019
Of each statue we made photos from various angles and also detail photos of the various texts.
If you want to use photos, please contact us via the contact form (in Dutch, English or German).
© Website and photos: René & Peter van der Krogt