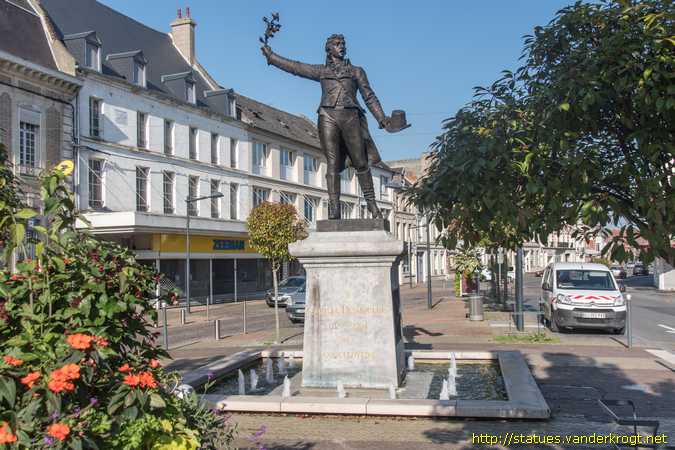 Bronze statue of Desmoulins, holding up his hat in one hand and a branch in the other. Depicted is the occasion when Desmoulins harangued a crowd in Paris' Palais Royale. The scene is repeated in one of the bas-reliefs on the side of the pedestal. 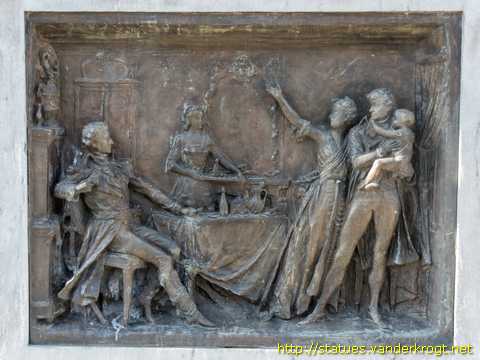 ?
(A couple with a child in front of a man sitting on a table and a female servant)

Originally the sculpture had been by Doublemard but this had to be replaced by Charpentier's work. Doublemard's plaster model had been presented to the Paris Salon in 1882 and a bronze made from it. This seems to have been commandeered by the German army during the 1914-1918 war and in 1923 Carpentier was commissioned to create a bronze based on Doublemard's original work. The Germans took the bronze work away again during the occupation 1940-1944 and Charpentier's work was eventually reworked and inaugurated on 14 July 1949.

Item Code: frpi071; Photograph: 15 October 2017
Of each statue we made photos from various angles and also detail photos of the various texts.
If you want to use photos, please contact us via the contact form (in Dutch, English or German).
© Website and photos: René & Peter van der Krogt