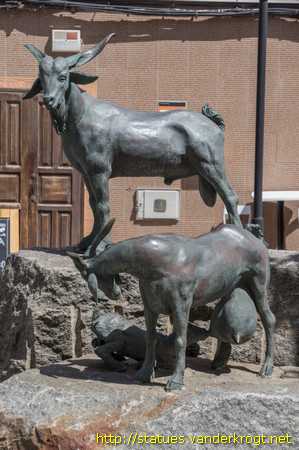 Sculpture group of a family of goats.

From 'Puerto on foot, a cultural route to discover the capital city', identical with the English text on the sign:
"They constitute the emblem and link of the majorero with his remotest past. This collections of the sculptures is located in the square devoted to the first Mayor of Puerto del Rosario, and states the former name of the town and municipality until 1956. lt is an undeniable recall to its aboriginal past, as in this place the goats where watered next to the gambuesas that existed until the beginning of the 20th century."

The town of Puerto del Rosario advertises itself as 'Ciudad de la Esculturas' (City of Sculptures) or 'Parque Escultórico' (Sculpture Park). Over 150 sculptures are scattered around the town (most of them are abstract and not on this website).
Many of these sculptures are the results of the 'Simposios internacional de Escultura' (International Sculpture Symposiums), organised yearly from 2001 to 2006, and further in 2008, 2014 and 2015, by the sculptor and town council member Toño Patallo. At each symposium the sculptors are supplied with a different common material (Betancuria stone, Bermeja Mountain stone, white marble, iroko wood, ivory cream marble, etc.) and work for a few weeks in a place open to the public. The sculptures made during the symposiums are placed in the public space.
There is no 'Sculpture Park' in the real sense of the word. The whole town is the 'park'. However, there hardly any information about the sculptures. The town plan Mapa Calejero / Street Map Puerto del Rosario from the Tourist Information office (April 2018) lists 26 sculptures with their titles (but no dates or sculptors), and a 2016 version Puerto a pie, un itinerario cultural para descubrir la capital (downloaded in December 2017 as on-line PDF) lists only 16 sculptures with full information.

Item Code: esca321; Photograph: 13 April 2018
Of each statue we made photos from various angles and also detail photos of the various texts.
If you want to use photos, please contact us via the contact form (in Dutch, English or German).
© Website and photos: René & Peter van der Krogt