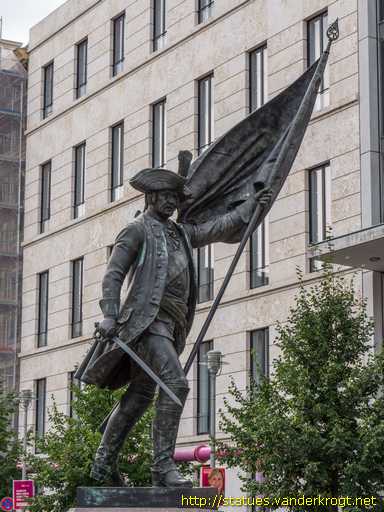 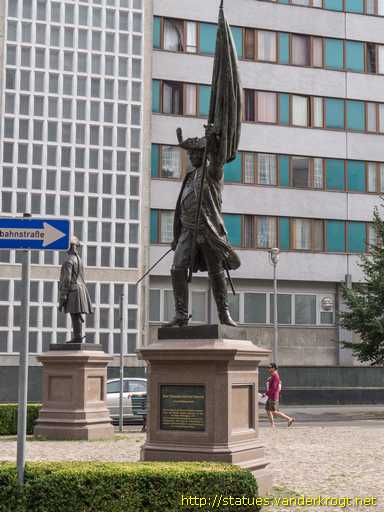 Bronze statue of Count Schwerin with flag and sword. 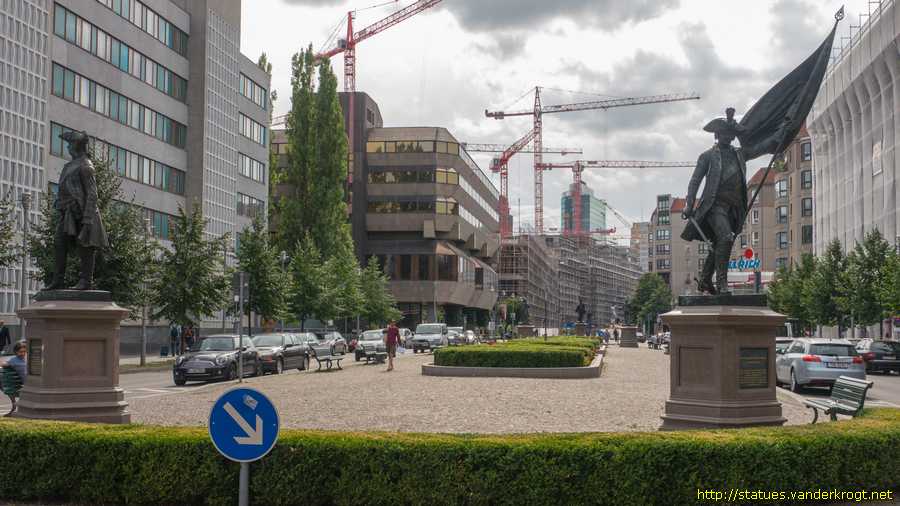 Statues of Prussian Military on the Wilhelmsplatz

After the end of the Seven Years' War in 1763, a plan was developed to to build on the Wilhelmplatz statues of the Prussian generals fallen in that war. So arose four marble figures of They show the the general in a conventional form. Schwerin and Winterfeldt shown in antique-style with Roman clothes and weapons, and Keith and Seydlitz in period uniforms.

In the years 1794 and 1828 two more statues were placed on Wilhelmplatz, which were originally intended for other Berlin city squares. They came from the Berlin sculptor Johann Gottfried Schadow and depict

On the advice of Christian Daniel Rauch because of the susceptibility of the material the sculptor August Kiß made in 1857 bronze versions of the marble statues. However Kiß designed the sculptures of Schwerin and Winterfeldt entirely new and and depicted them also in period uniforms. The original marble statues are at present in the Bode Museum.

The six statues survived the Second World War, but remained for decades in various deposits withdrawn from public view. After the turn of the millennium at the instigation of the Berlin Schadow Society was planned to replace the statues in the vicinity of their historical locations. The bronze copies of the monuments of Anhalt-Dessau Zieten and were placed on the metro island on the transverse axis of the former Wilhelmplatz in 2003 and 2005. The remaining four bronze statues found in September 2009, a new site on the adjacent Zietenplatz.

Tablet on the pedestal of Seydlitz' statue:

Item Code: debe026; Photograph: 9 August 2013
Of each statue we made photos from various angles and also detail photos of the various texts.
If you want to use photos, please contact us via the contact form (in Dutch, English or German).
© Website and photos: René & Peter van der Krogt