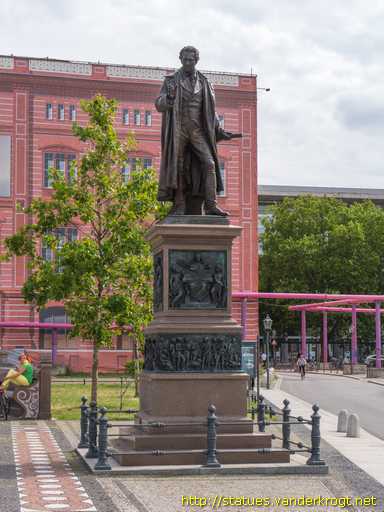 Bronze statue of Thaer with a plow. The statue was begun by Rauch and after his death in 1857 finished by Hagen (copy of 2000 by Hans Starcke) on a pedestal covered with bronze reliefs. These reliefs are also copies made by Starcke. Only three of the eight reliefs are still in existence, they are, just as the original statue, in the Humboldt University. 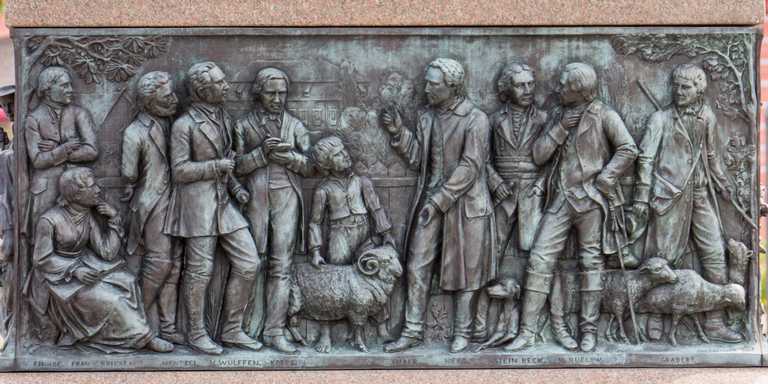 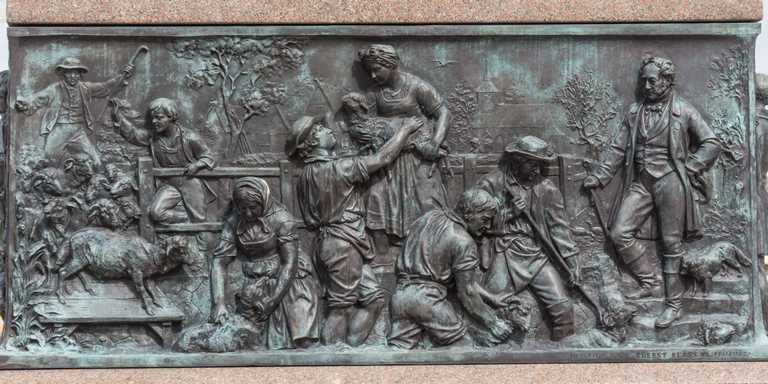 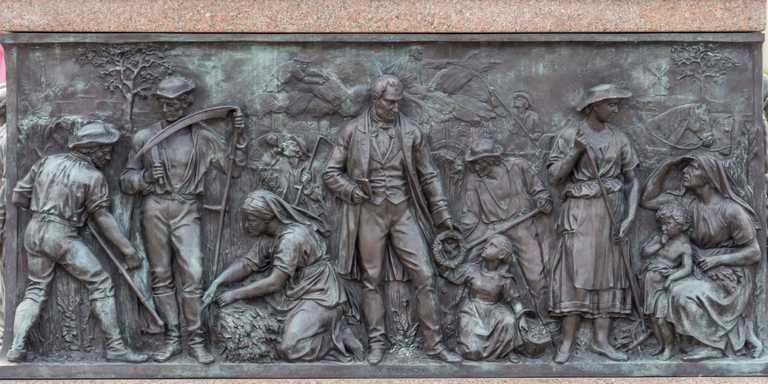 The Harvest at Thaer's model farm. In the center the agriculturalist Johann Heinrich von Thünen (1783-1850; Wikipedia).

Three reliefs are new casts from plaster casts of the originals, the others are reconstructions by Starcke. The original was unveiled 5 November 1860. 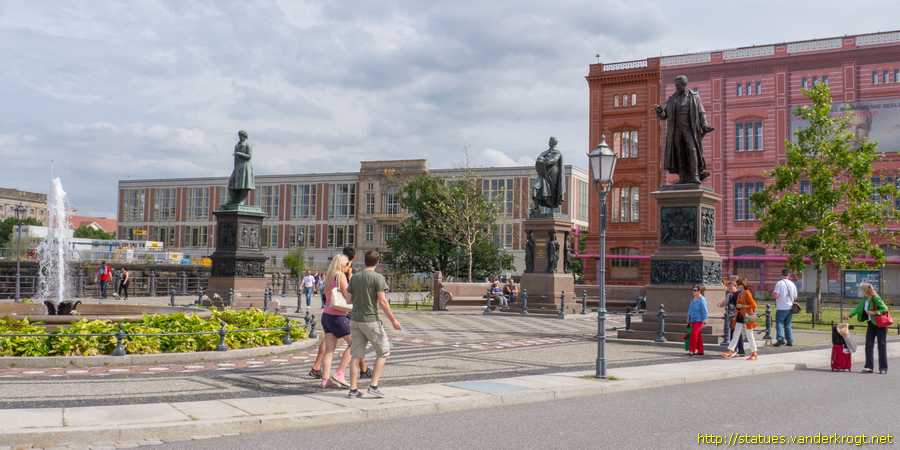 The Academy of Architecture (Bauakademie) on this square was the work of the city architect Karl Friedrich Schinkel (1836), who intended to create a square encircled by trees in front of the northern facade of the Academy. In 1837 Peter Joseph Lenné created here a decorative square, then called Platz an der Bauakademie (Square at the Academy of Architecture). In the 1860s monuments for Albrecht Daniel Thaer (1860), Christian Peter Wilhelm Beuth (1861) and Karl Friedrich Schinkel (1869) were erected. With the erection of the third monument the name of the place was altered in Schinkelplatz. Honoring these three men in this form was a first in the history of Berlin, an expression of the growing self-consciousness of the urban bourgeoisie. The sculptor Christian Daniel Rauch spoke of the "first hero on a public place without a sword".

During the Second World War, the Schinkelplatz and the surrounding buildings suffered severe damage. Schinkel's statue was toppled from its pedestal, the monuments of Beuth and Thaer had suffered bullet and splinter damage. By 1949, the four caryatids from the base of Schinkel's statue and five reliefs of Thaer's statue were stolen. The Academy of Arts was demolished 1962 to make place for the new Ministry of Foreign Affairs of the German Democratic Republic (1966). The statues were placed in the Humboldt university and other locations in town. The ministry building was demolished in 1995/96 and the reconstruction of the Schinkelplatz started. Schinkel's statue returned in 1996, Beuth's in 1999 and a copy of the statue of Thaer in 2000 (the original is in the agricultural faculty of the Humboldt University). Landscaping was finished in 2008. There are plans to rebuild the Bauakademie - now you see scaffolding with a large image of the facade.

Item Code: debe020; Photograph: 9 August 2013
Of each statue we made photos from various angles and also detail photos of the various texts.
If you want to use photos, please contact us via the contact form (in Dutch, English or German).
© Website and photos: René & Peter van der Krogt