Bronze statue of Blücher with his sword in his hand and his foot resting on a gun.

The pedestal is completely covered with bronze reliefs, in three levels.

The entry of Prussian troops into conquered Paris. The sitters are Blücher, Gneisenau, Yorck, Bülow, Kleist, Prince Wilhelm (1783-1751) and Prince August of Prussia. The Quadriga from the Brandenburg gate, which was brought to Paris by Emperor Napoleon I, is lifted to be returned. Rauch shows himself as if he was present rolling back the Quadriga. On a wall to the right a civilian are looking to an affiche on the wall saying acte d'abdication de l'empereur napoleon
Right

The people rise to the call of their king to fight, a boy holdin a paper with the text "Der König an sein Volk". The oath to the flag, the distribution of the arms, the parting of the family are represented on the left field. A troop of horsemen rides through a gate, which is designated by the coat of arms as the gate of Breslau (Wroclaw).
Back

March of the army, at the fountain a country girl offers the passing soldiers a refreshing drink.
Left

The crossing over the French border - i indicated by the tree entwined with vine. A group of horsemen is attacking, an another group is resting at a bivouac-fire. The seriousness of the struggle is signified by a dying person, represented by the poet Theodor Körner (1791-1813), who died in battle. The staff officer is Gneisenau, the civilian next to him Wilhelm von Humboldt, and the one leaning to a horse is the architect Schinkel. 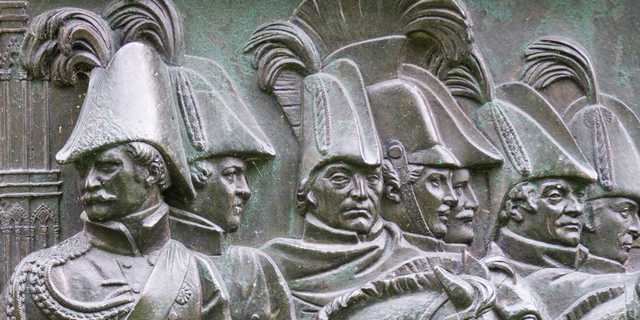 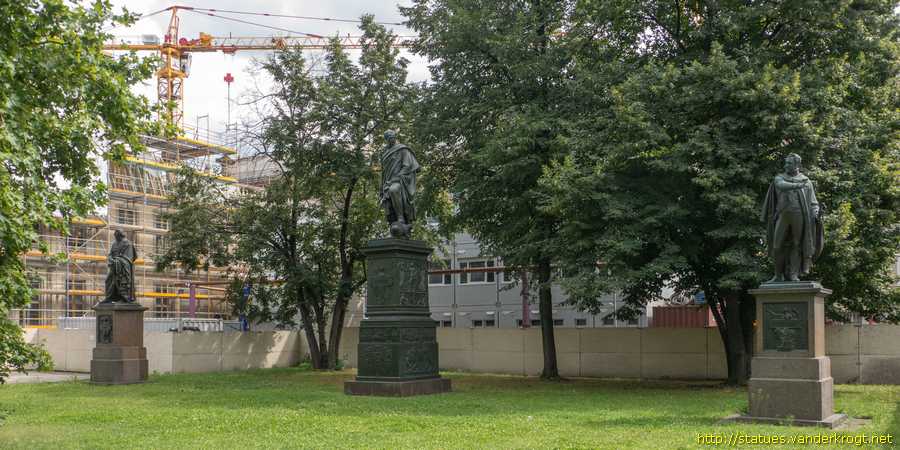 Five statues of generals in the Prinzessinnengarten (Princess' Garden) at Unter den Linden:

Because of a large construction sites around the Prinzessinnengarten it was impossible to make good photos of the first two statues, and you see the construction works also on the other photos.

Unfortunately, due to high costs, it is no longer possible to display the map directly. Via the links below you can find the position:

Item Code: debe015; Photograph: 9 August 2013
Of each statue we made photos from various angles and also detail photos of the various texts.
If you want to use photos, please contact us via the contact form (in Dutch, English or German).
© Website and photos: René & Peter van der Krogt