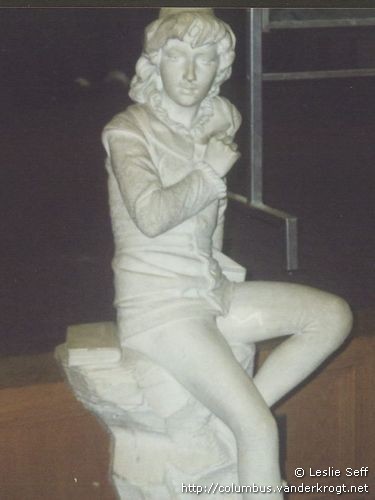 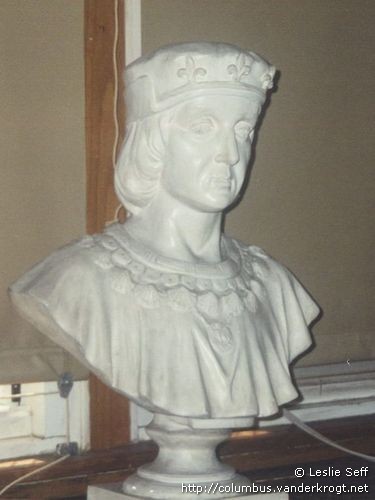 Marble statue of "The Boy Columbus", done by Giulio Monteverdi. The statue is 4 feet high and has Columbus holding a map in his left hand engraved with the words "España and Atlantic Ocean". Next to his right hip lies a book entitled "Marco Polo"

"Colombo giovinetto" or "The First Inspiration of the Boy Columbus"

Columbus as a charming child at play: he is sitting on a mooring-post upon a pier, against which the waves are breaking; he is in deep meditation and holds a book in his hand.

The statue has been ordered to Giulio Monteverde by Cap. d'Albertis for his castle in Genoa. Actually, d'Albertis's nephew Filippo was the model for Columbus.
The sculpture was made in Rome in 1870, and won a gold medal at an exhibition at Parma, Italy. The original statue stands in the loggia in d'Albertis castle, the statue looks exactly in the direction of San Salvador, i.e. south-south west. 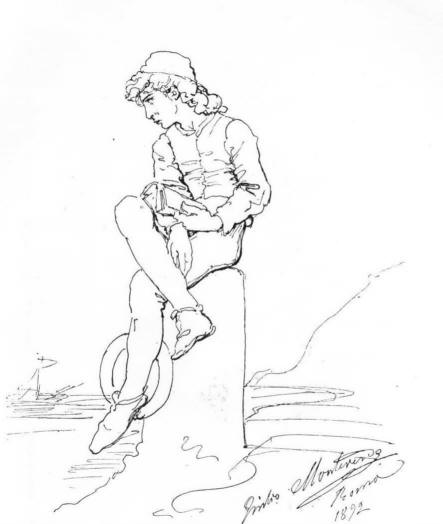 Copies, in marble and chalk, are in

Monteverdi carved shortly before his death in 1910 another statue of Columbus as a boy, of which a copy is in the Christopher Columbus High School in New York.