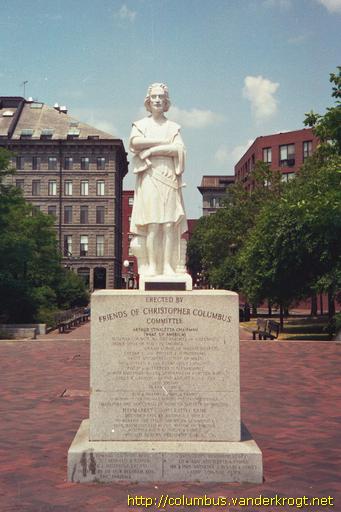 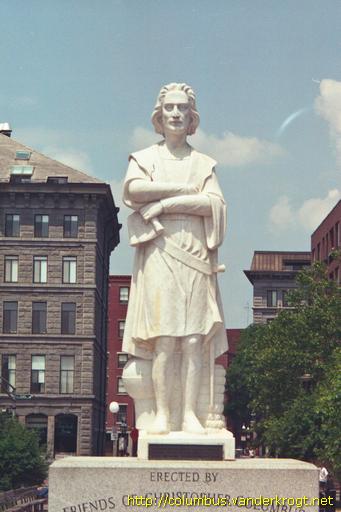 Life size Carrara marble statue on large granite pedestal, portraying Columbus with his arms folded in front of him. In his left hand he holds an unfurled scroll. A sword hangs from his belt on his left side. Behind his right foot is a globe and behind his left foot a rope-covered pier.

On all four sides of the pedestal, the plinth, and on the four poles surrounding the statue, hundreds of names are inscribed of donators etc. Inscriptions about the statue itself are:
On the south side of the pedestal:

ERECTED BY
FRIENDS OF CHRISTOPHER COLUMBUS

followd by the names of the Committee.

On the plinth, south side:

At the north side, in the plinth:

On the base of the statue itself, a bronze plaque is found with the text:


THIS STATUE SCULPTURED FROM CARRARA MARBLE, IN
CARRARA, ITALY, IS THE SAME MARBLE FROM WHICH
COMES MICHELANGELO'S "PIETA," "MOSES" AND "DAVID."

The photo above is made in 1995. At my second visit in 2003 the head of the statue was removed and the statue was packed in blue plastic because of renovations works in the park.